As the book grows (perhaps “evolves” is a better word), it has become clear to this author that writing a ‘technical’ history like this is like trying to build a 5000 square foot house with bamboo, pipe cleaners, and aluminum foil. And all of that, set on a foundation of mostly sand with a few boulders randomly placed (but well hidden…).
If lucky enough to find one of those bits of historical ‘bedrock’, one can just pile all manner of stuff on there and hope it doesn’t just topple over. Of course, if it does, it can be rebuilt. One of the “tricky” parts is when one wants to tie in other additions to the structure in a way that they will be able to support themselves.
Perhaps the closest comparable category is “Cold Case Forensics” or, in other words, Arthur Conan Doyle’s “Sherlock Holmes”, backwards. With the exception (in jazz history anyway) of Russ Connor’s amazing work with Benny Goodman’s history (because he WAS THERE!) there has never been a comprehensive ‘study’ of any other jazz musician from the standpoint of what he used to achieve what he sounded like. Of course, Ricky Riccardi can tell you which horns Louis Armstrong used/had but who, other than he and  a few trumpet/cornet players, could tell you the complete ‘lineage’ of Armstrong’s horns from the Waif’s Home to his last days in New York? Accurately? With undisputed documentation?
This author believes that, like Louis’ legacy, Gene’s was equally as important and deserves as much dedication. Hence, it was time to break out the bamboo and foil!! Which was done nearly a decade ago.
Luckily, a fair amount of  “bedrock” was immediately available to ‘build’ on (this author’s musical idol since the beginning) and it was simply a matter of where to put stuff in the book, right? No. Not so simple…
One advantage was, like Gene’s playing, his choice of equipment was an equally important focus. They were solidly intertwined throughout his entire career. Like Armstrong’s name being immediately synonymous with jazz trumpet, Gene Krupa is not only synonymous with the word “drums” but also with the brand, “Slingerland”. No other name in jazz has had this. Even Louis would not use the same make of horn throughout his life.
One would assume that this fact would make the whole process easier. Only partially. Gene was a “known” jazz drummer from 1927 until 1973. Of that whole period, the “documented” history of an association with the Slingerland Banjo and Drum Company only begins ca. 1935. What was Gene using before joining Benny Goodman? Welcome Mr. author,  to the first (and possibly deepest) SAND pit! A few dubious anecdotes from his peers. A single photo of him standing in front of someone else’ bandstand and you have the full extent of historical “documentation” of Gene’s career/equipment beginnings. Even the anecdote about him being the first to use a bass drum in a recording studio was proven to be wrong.
So, this author continues to dig for the oldest “bedrock” to build on. Somewhere out there, in some attic, old trap case or bookshelf is that collection of snapshots of Gene’s set in 1928. Maybe that dusty photo album of old Uncle Berfward’s time playing that Wisconsin resort where Gene’s drums were set up.
Below is page 8 of “GK”. It is clearly lacking in the “image” department… 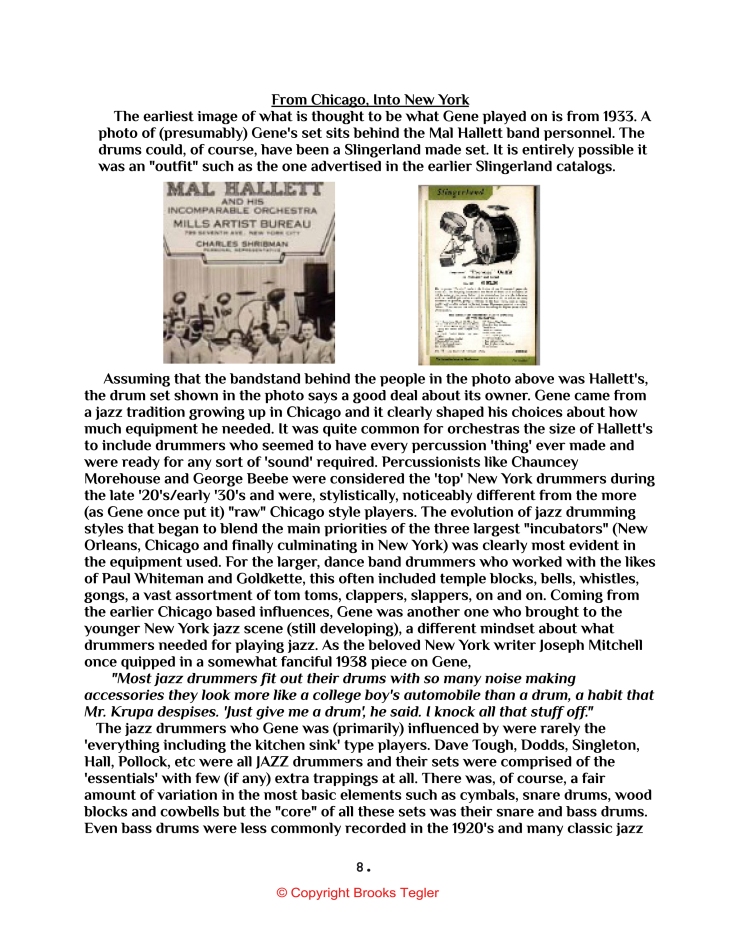 But, the author remains, ever Hopeful…

One thought on ““GK” Gene and Louis”